WHAT TIME DO THE FESTIVITIES START?

From 2:00PM – 10:30PM July 28, Aug 1, and Aug 4, the Honda Celebration of Light will kick off at each day with our free live music site, The Park Stage at Second Beach – along with food trucks, activations and roaming performers, all along our Second Beach location and English Bay. Don’t miss special pre-show performances each night before the 10PM fireworks, including our Redbull Airshow (joined by the Canadian Forces Snowbirds on Aug 1), and Z FEST lineup each night over the bathhouse roof at English Bay.

WHERE DOES THE FESTIVAL TAKE PLACE?

The Honda Celebration of Light is proud to host a myriad of activities day-night leading up to the fireworks. Enjoy live music and entertainment during the day at the Park Stage at Second Beach in Stanley Park, before taking in the fireworks at English Bay just off Davie St. & Denman St. in Vancouver’s West End. Though English Bay offers the most direct views of the fireworks, check out other beach-side vantage points here.

IS THE HONDA CELEBRATION OF LIGHT A FREE EVENT?

Yes! The Honda Celebration of Light is thrilled to welcome Vancouver locals and visitors alike to enjoy days of free, fun-filled family entertainment before soaking in the fireworks each evening. We do, however, also offer ticketed options for those looking to secure a spot away from the crowds. For more information on our ticketed venues, click here.

WHAT TIME TO THE FIREWORKS START?

Each of the three fireworks pyrotechnic performances will begin promptly at 10PM on July 29, August 1, and August 4, 2018.

WHICH COUNTRIES ARE COMPETING IN 2018?

This year, we are excited to host South Africa, Sweden, and South Korea as the three competing teams. Don’t forget, you can help select the winning performance by casting a vote on our mobile app! To learn more about the countries click here.

THE PARK STAGE AT SECOND BEACH

Located at Second Beach in Stanley Park, this free all ages area will feature live music, food trucks, sponsor activations, a site-wide liquor license and the RE/MAX Family Zone. Bring your friends and family, kick back and relax in the sun while you enjoy the music! Explore the lineup.

Programmed by our radio partner Z 95.3 FM, Z FEST will feature some of today’s top talent performing on the Bathhouse Roof at English Bay on each night of the fireworks. Explore the lineup.

Tune into the fireworks music soundtrack from wherever you are by downloading the Honda Celebration of Light official Mobile App or tuning in to LG 104.3FM! The simulcast will begin at 10PM each night of the festival.
iOS
ANDROID

Sounds Like I’ll be working up an appetite!  Where can I eat?

The Honda Celebration of Light is proud to host an array of local food options for our guests! Food Trucks will be located at English Bay along Beach Ave. and the Park Stage at Second Beach in Stanley Park, along with hot & cold buffet options at our ticketed venues The Keg Lounge, Concord Lounge at the Inukshuk and YVR Business Class Cabanas. Explore the food

How do I get to english bay?

Located in Vancouver’s West End, English Bay is accessible along seawall routes from Sunset Beach or Stanley Park. Heading to the corner of Davie St. and Denman St. (look for the laughing man statues) will land you right in the heart of festival activities.

How do I get to SECOND BEACH?

Found in Vancouver’s iconic Stanley Park, take a short stroll from English Bay along the seawall, or bike from Coal Harbour towards the Second Beach Pool, from there you will find our free live music site, The Park Stage at Second Beach (located in Ceperley Meadow) – running from 2PM-10PM each day of the festival.

DO YOU HAVE BIKE PARKING?

You bet! Our complimentary bike valet is located just outside The Park Stage at Second Beach. There’s no better way to arrive than biking the seawall to Stanley Park to enjoy some free live music before the fireworks begin each night at 10PM.

WHAT ARE MY PUBLIC TRANSIT OPTIONS?

Event nights will see increased Skytrain, Canada Line, and Bus service to accommodate a large number of fireworks fans. Be patient on your journey – the show will be worth the trip!

Closest SkyTrain Station to the Festival is Burrard Station and the Yaletown-Roundhouse Station of the Canada Line. Numerous buses travel along Georgia St. to Denman, and the #6 will bring you from Granville St. to Denman St. Kitsilano is serviced by numerous bus lines, however, there is no Skytrain service to the area.

CAN I DRIVE TO THE FESTIVAL?

We strongly recommend not driving to the festival. With large crowds and road closures in effect from 6:30PM onwards, coming to and from the festival will be much easier via transit, bike, or on foot.

Do you have accessible viewing areas?

Complimentary accessible viewing is available on the top deck of the YVR Observation Deck for disabled guests and 1 companion. Seating in this area is limited and on a first come first serve basis, so best to come down early to save your spot!

Parking near the festival can be limited, familiarize yourself with the following designated Disabled Parking areas.

A valid disabled persons’ decal or placard is required and should be clearly displayed when utilizing Reserved Disabled Parking areas. Users are still obligated to follow the usual payment requirements and must observe all posted traffic signage. Motorists not displaying valid decals/placards will be towed. The following areas are reserved strictly for disabled persons parking on event nights on a first come, first served basis:

KITS POINT
Limited number of stalls in the parking lot at Arbutus and McNicholl (from 5pm onwards).

SAFETY ON THE WATER

Can I view the fireworks from my boat?

With so many Fireworks fans, be extra cautious, keep the following safety tips in mind to enjoy an evening of wonder on the water. 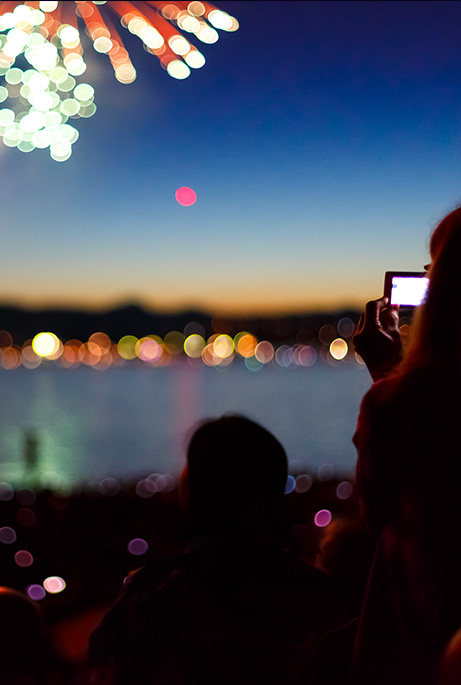